Assembly of a test bench

In order to satisfy the high quality demands in automotive production, test facilities which permit the stresses for vehicles to be realistically and practically simulated are indispensable. Modern test benches support development and quality control in efficiently and continually improving the performance capability of their products.

The company Opel entrusted us with the assembly of a test bench by MTS Systems in Berlin on their works premises at their Rüsselsheim location. In the preliminary stages of the operation, we were present on-site for the delivery of the components, unloaded these from the trucks with a 16 tonne forklift and transported them to an intermediate storage position on the outside area of Adam Opel AG in Rüsselsheim. Four large system parts and diverse further smaller parts, the heaviest of which weighed 8 tonnes, had to be transported. The operation itself took place on a different day, and was implemented by a three-man assembly group from our team. A completely equipped assembly vehicle, a 16 tonne forklift and finally a LTC 1045-3.1 with an assembly jib provided everything that was required for this operation. Firstly, we transported the machine parts for intermediate storage in a hall which was located directly next to the building intended for the new test bench. The parts were removed from their transport boxes, unpacked and moved on heavy-duty load rollers into the neighbouring hall to their intended destination, and positioned at the pit edge. On the opposite side, the LTC 1045-3.1 was waiting to lift the system parts into the pit prepared for this purpose.

In order to implement this operation, the façade of the hall walls had to be opened in advance on the site, and as a result, our crane could drive the decisive metres into the hall. Our crane driver supported the crane against the solid pit wall and therefore could safely telescope over the pit in order to attach the individual machine parts. Our assembly team was responsible for the secure strapping of the parts, and then it was hooks away for the manoeuvring of the individual parts to their planned final position. In this way, the automobile test bench was assembled piece by piece. Subsequently, the final assembly and the connection of the test bench were performed on-site. After a three-day deployment, the RIGA team was able to reflect on a successful and smooth operation. 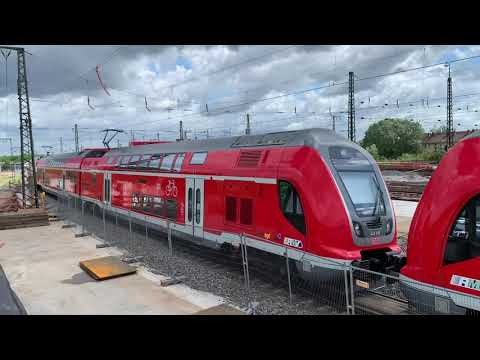